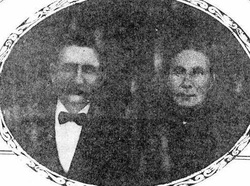 The Family, early pioneers, settled in Collin County in the 1860's. A son, James A. Barnett, married Mary Cantrell, and the couple chose the Blue Ridge area as their home. Barnett had a sawmill and gristmill on Pilot Grove Creek west of Blue Ridge, and in 1877 he built the first gin in Blue Ridge. They were considered one of the largest landowners in Collin County during that period of history. Some of this land is still owned by his great grandchildren, Lena Milstead and her brother James B. Hedrich. [...]