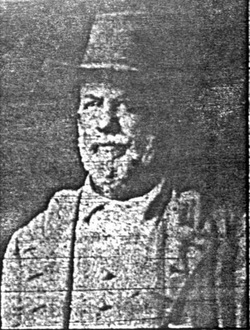 The pioneer newspaper man of McKinney, now retired from the profession, is Capt. John H. .

Capt. Bingham came to this city from Dallas in 1867,having some time before purchased the Enquirer, which was then edited by the late Col. R. DeArmond, who continued in editorial charge some two years after Capt. Bingham arrived. At that time there were two newspapers – the Messenger and Enquirer. The former was established in 1857 and the latter in 1866. James W. Thomas founded the Messenger, while the Enquirer was established by John W. Murray and T. E. Grisham. The Enquirer continued publication until 1896 under the direction and ownership of Capt. Bingham, at which time, tiring of the arduous labors of newspaper work, he retired and the paper ceased publication, the material still remaining in possession of Capt. Bingham in a brick building built especially for the plant.

In the meantime innumerable sheets with fleeting existence sprang into life. Of those whose names are best remembered by the Captain were the Advocate, Black Waxey and Mercury. The Advocate was founded by Thos. W. Bomar, with whom was associated Joseph W. Baines. The Black Waxey succeeded the Advocate and was owned by Mr. Bomar. The Mercury was launched by E. J. Rudolph, a well-known newspaper man who afterwards went to Sherman.

Again there were a few short-lived papers whose names have been forgotten by Captain Bingham, after which The Democrat was established by Robinson & Thompson. In the meantime the Examiner was brought into existence by a stock company headed by Judge F. E. Wilcox, Clay Mack [missing]

Clint Thompson were all, at different times, connected with the Examiner as editor. Clint Thompson founded The Gazette, but sold out to Tom W. Perkins, then bought The Examiner and still owns it. For awhile, Former County Superintendent W. M. Erwin was associated with Mr. Thompson on The Examiner. At present, Mr. Erwin is editor of The Paul’s Valley (I. T.) Enterprise. The Democrat was founded in 1884. At one time, Clay Mack was its editor, as was also E. W. Kirkpatrick. About eighteen years ago, F. C. (Carlie) Thompson assumed its editorship and continued as such until 1904 when he sold out and is now editor and owner of the Plano Star-Courier. Walter B. Wilson became associated with The Democrat nearly thirteen years ago. In 1901 Carlie Thompson and Walter B. Wilson purchased the Semi-Weekly Courier and combined it with The Democrat. They also bought the Daily Courier, which had been established by C. R. Ball and Jerry Magner and continued its publication. In 1902, they sold an interest in these papers to J. Frank Smith. In 1904, Wilson & Smith bought Carlie Thompson’s interest and in July 1906, Mr. Wilson purchased the interest of his other partner, Mr. Smith.

Tom W. Perkins established the Wylie Rustler. Later he bought the Plano-Star. Then the McKinney Gazette and soon established the Daily Gazette. A few months ago he consolidated his papers with The Daily Courier and The Weekly Democrat owned by Walter B. Wilson and the combined papers are now known as The Daily Courier-Gazette and The Weekly Democrat-Gazette, with Perkins & Wilson as editors, publishers and proprietors.

Capt. Bingham, although having retired from the business nearly twelve years ago, still retains a keen interest in matters pertaining to the craft, as well as current events.

During his newspaper career he was known as a forceful writer and his publication was classed with the best in the state. Unlike many members of the fraternity, he acquired a competency which he can now enjoy after the arduous duties of an active life.

After the death of his father in 1854 John came to Texas along with his widowed mother and two younger sisters, Sallie and Mattie. They settled in Dallas and John went to work as a typesetter (Printer’s devil) for the Dallas Herald a predecessor of the Dallas Morning News. He worked for this newspaper until the outbreak of the War Between the States at which time, the entire staff of the newspaper signed up for military duty with the Confederacy. He served over four years.

After the end of the war he returned to Dallas and again worked f or this same newspaper. During this time he set a speed record for setting type which was never broken or even matched until mechanical typesetting was introduced. In 1867 he purchased a newspaper in McKinney and continued to work in Dallas to earn the money to pay off his indebtedness for the purchase of the paper. Isaac Finks Graves and Judge Muse had signed his note with him when he purchased the paper.

He began publishing the ENQUIRER in February 1869 and continued to publish same until 1898 at which time he retired.

On September 30, 1869 he married Eliza Virginia Graves the eldest daughter of Isaac Finks Graves and his wife Margaret Ann nee Stevens. The Graves couple came originally from Orange County Virginia but moved soon after their marriage t o Columbia, Missouri. Eliza Virginia was born there on Christmas day 1841. The family came to Texas in 1856 and settled in McKinney, Collin County, Texas.

The family of John H. Bingham lived in a house on Louisiana Street which was next door to the printing office of the Enquirer until 1883. 1882 John began to build the home located at 804 Chestnut Street. All lumber used in the construction of the home was hauled overland from Jefferson, Texas by ox-cart. The residence was under construction for a period of two years. The lower floor of the home was sufficiently completed in the early spring of 1883 for the family to move in and occupy the lower floor. The house plan was drawn from memory of a home in Georgia which John Bingham had admired while serving in the war.