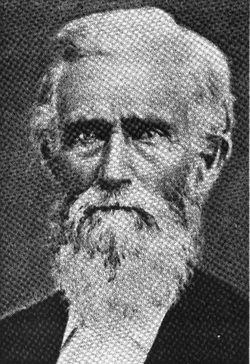 Joseph W. was born in Louisiana in 1844. He served in the Confederate Army, taught school, studied law, and in 1867 came to live in McKinney. He set up a small law office upstairs over the Foote Drug Store on the northwest corner of the square. On September 12, 1869 he married Ruth A. Huffman, a descendent of a pioneer family in Collin County. He went into real estate, selling lots in the city of McKinney. In late 1873 the block east of the Trinity Presbyterian Church on Davis Street was placed in his hands to sell. He bought the entire block for $600 and in a few months sold all of it except lots 177 and 178 on which there was a small frame house built by Colonel Ingram. This became his home from 1869 to 1883 when he left McKinney.

In 1876 Thomas E. Bomar came from Sherman and established a weekly newspaper on South Tennessee Street. He called it the McKinney Advocate and it was a good paper. Clint Thompson, later owner of the Examiner worked there as did several other men later to be associated with Collin County newspapers. In early 1878 Baines bought in with Bomar as part owner of the newspaper and a year later purchased his partner’s share, thus became the sole owner. Baines moved his paper office in 1880 to the north side of the square over the present North Side Drug Store. Baines ran a good newspaper. No copy of the newspaper has been located but quotes from the paper by other sources seems to show that he was outspoken about local problems and affairs. In 1881 Baines again moved the Advocate. He took over the vacant upper floor over the present Woolworth Store on the west side of the square. In 1882 Bomar consolidated the McKinney Citizen with Baines’ Advocate and the name was changed to The Black Waxey, and soon became one of the leading weekly newspapers in North Texas. Baines’s editorials were copied all over the state. The Black Waxey prospered but Baines did not confine his activity solely to the paper. He again took up real estate, buying and selling property long after he left here in 1883. He believed in the future of the town and constantly said so in his editorials.

Joseph Baines’ father, Robert [See Note], was a personal friend of Sam Houston and was aided by Houston in getting his appointment as President of Baylor University at the start of the Civil War. John Ireland, elected Governor of Texas in the fall of 1882 was an admirer of Robert Baines and knew young Baines also. Before Christmas he wrote [Joseph] Baines that he was going to appoint him Texas Secretary of State, providing Baines would accept. Baines accepted and on January 18, 1883, he was appointed. He sold The Black Waxey to Tom Ed Bomar on January 3, 1883 and moved his family to Austin and only came to McKinney now and then to attend a funeral of old friends. Baines served during Gov. Ireland’s term of office then moved to Blanco where he practiced law until 1903 when he moved to Fredericksburg. He died there on November 18, 1906 leaving three children, one of whom was Rebekah who married Samuel E. Johnson and became the mother of Lyndon Baines Johnson, later to be President of the United States.

by Jerome Sneed Jr., a grandson.

Joseph W. Baines, grandfather of the late President Lyndon Baines Johnson was a prominent business man in Collin County as well as a state political figure in the l870s. He married in McKinney. The bride was Ruth Ament Huffman, daughter of Dr. John S. Huffman also of McKinney, while she was only 14 years of age.

Joseph Baines taught school at Rowlett while reading law in the office of Governor Throckmorton. He later went into the law firm with Major Brown and was also a real estate developer from 1869 to 1883. He established a newspaper in McKinney and called it The McKinney Advocate (1877) and later changed the name of the newspaper to The Black Waxey. This newspaper was later combined with The Collin County Citizen and was edited by Thomas A. Bomar in 1882. Mr. Bomar bought out Mr. Baines interest in 1883.

His home was located on Davis Street just 2 blocks from Tennessee Street. The house no longer standing.

Although the spelling of the surname is different, it is the same person.

News has been received here of the death of Capt J. W. Bains at his home at Fredericksburg, Texas, after a lingering illness. Capt. Bains was formerly a prominent resident of McKinney, having practiced law here a number of years, being a partner of Major Brown, now of Sherman, and also ably edited the old McKinney Advocate. He was Secretary of State under the administration of Governor Ireland. Capt. Bains was a brother-in-law of Mrs. L. C. Largent of this city, having married her sister, Miss Ruth Huffman, and is survived by his wife and three children. After moving from this city he practiced law at Blanco for a number of years, moving to Fredericksburg three years ago. Capt. Bains was an able lawyer, a forceful writer and a genial, wholesouled gentleman, being well remembered by our older residents who will be grieved to learn of his death. He was sixty-two years of age. [Grandfather of President Lyndon Bains Johnson]