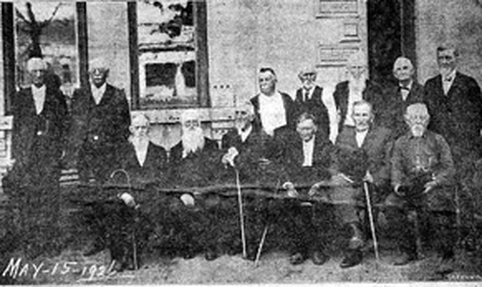 SNAPSHOT OF A BUNCH OF "OLD TIMERS"

On almost any afternoon in good weather you can find several old men who defended the rights of the South in the war between the States, sitting on east side of the court house in the shade engaged in pleasant conversation. A few evenings ago it happened that thirteen of these old veterans were seated near each other, when some one remarked, "We should have our photos in a group, as it is not probable that this number will happen to be together again."

The suggestion was received by all as the proper thing to do. Dr. O. H. Kirkpatrick, Commander of Throckmorton Camp 109, U. C. V., called on Photographer Greenwood to come over with his equipment and do the work, which he did. The picture is a good one for a group. It will be difficult to get a group of thirteen finer looking old men.

Those represented in the picture are as follows. seated from left to right are:

No. 1 -- W. L. Osborne, age 87 past, who served in Company D 53rd Tennessee Regiment during the War between the States. He came from the state of Tennessee to Texas in the year 1870, and has lived during much of the time since in Collin. He farmed and worked at the carpenter's trade until age made his retirement best. He recently made the long trip to Birmingham to attend the Reunion of the Veterans, Sons of Veterans and Daughters of the Confederacy. He says he had a great time. He now resides in Melissa but often divides his time with his daughter, Mrs. Henry Morgan, in McKinney.

No. 2 -- Eld. R. C. Horn, now passed 82 years, who came from Tennessee to Collin county in 1858 and his real home has been in and near McKinney since that date. He served about two years and eleven months in the Confederate army. He was a private in D. C. Haynes' Company K and in L. M. Martin's Reg. 5th. Texas Partisan Rangers. He has taught school, run a farm, worked at the carpenter's trade, handled real estate, sold goods and done a few other little jobs. He has preached Christ to the people for over fifty-eight years. He has been a writer for the press both secular and religious for over fifty years.

No. 3 -- R. M. Board now past 89 years, who served during the entire war between the States in the 9th. Texas, and was Captain of his company. He came from Kentucky to McKinney in 1855, and has made this his home ever since. Except a service as Postmaster for four years, he was a leading merchant of McKinney until age and loss of eyesight caused him to retire to private life. He and his good wife reside with his daughter and son-in-law, Mr. and Mrs. Fred Everett, who tenderly care for them in their declining years.

No. 4 -- J. A. Davidson, who came from Mississippi to Texas in 1861 and located first in Upshur county. Is now and has been in Collin for many years. He is the father of the Davidson who is noted as the Sunshine cotton man. Comrade Davidson served during the war between the States in a Mississippi Regiment. He followed farming all his active days.

No. 5 -- J. S .Dowell, in his 85th year. Came from Tennessee to Collin county in 1856, which he has called home since. He returned to Tennessee and enlisted in Company A, 7th. Tennessee Regiment, and was later chosen Captain of the Company. He served until the end of the war, then returned to Texas and became one of the large and successful farmers of West Collin. He later located in McKinney and for some time was in the implement and hardware business. He yet looks after his garden, cow, hogs, and bees. He is a man of great energy and a model citizen.

No. 6 -- W. H. Hinton, now 80 years old, has resided in Collin county from a boy when his parents came from Tennessee and settled near Farmersville. He was with the Home Guards during the closing year of the war. He is a farmer by occupation.

Standing from left to right are as follows:

No. 1 -- Scott Allison who came to Collin county from Tennessee in 1867, where he has resided since. He served in the Confederate army in his boyhood in Co. B, 24th Tennessee Regiment. His father was the late Col. R. D. Allison. He has run a hotel and also wagon yard as a business. He recently sold his yard and retired to try to regain his health. His is past 78 years of age and a good citizen.

No. 2 -- Monroe Smith, now 80 years old. Came from Mississippi to Texas in the year 1883 and settled in Collin county near Allen, where he farmed for some time. He removed to McKinney where he has resided since. He kept a boarding house on East Louisiana street for about 20 years. Comrade Smith served one year in Company K, 38th Mississippi Regiment. One of our beloved old citizens.

No. 3 -- Henry T. Brantley, now 79 years old, came from Tennessee to Collin county in the year 1881, where he followed the trade of a carpenter for many years. He served in the Confederate army in Co. A, 54th Tenn. Regiment. Comrade Brantley is a jovial fellow and seems always in a good humor.

No. 4 -- A. Hays, now 88 years old, is a native of Virginia, but his parents moved to Missouri when he was a small boy. He came from Missouri to Grayson county in 1896, later coming to Collin. He followed farming during his active days. He enlisted in the army but was cut off by the Federal army and saw little service.

No. 5 -- Tom McNeil served for four years in Co. #, 37th. Virginia Regiment. Came to Texas after the war and located in Collin county. A farmer until age retired him. He is is 88 years old. Resides on South Barnes street and has lots of friends.

No. 6 -- J. W. Field, 86 years old, was a member of Co. H, 2nd Missouri Regiment, Trans-Mississippi Department for four years. He came from Missouri to Texas in the year 1858. For many years he was a farmer and stock raiser and was prosperous. For several years he has been an official in the Central State Bank of McKinney.

No. 7 -- O. H. Kirkpatrick, M. D., now 86 years past, came from Tennessee to Texas in the year 1877, and settled in Collin county on a farm west of McKinney where he practiced his profession for several years. Later he moved to McKinney and has resided in and near the city for about 40 years. Up to a few years ago he was one of the leading physicians of the city and county, but age has forced his retirement. He served during the war between the States in Company E, 2nd Tennessee Regiment. Now Commander of Throckmorton Camp 109, U. C. V. of McKinney.